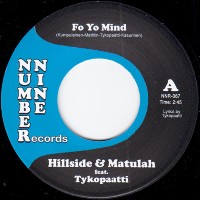 The new Number Nine records 45 (the label’s seventh 7″, by the monkey’s count) sees Finnish crew Hillside & Matulah hook-up with a pair of musician homies and Tykopaatti of hip-hop collective Joku Rotti Mafia to bring you something Fo Yo Mind and your feet. The track pitches things somewhere between the sort of good-time funky, boom-bap that Abdominal and UD could be found knocking out around a decade ago and an upbeat G Love & Special Sauce cut. All of which is to say it’s a rousing slice of party-starting material. On the flip they pull the rug out from under you stylistically though by knocking out – er – Knock Out which provides a frantic instrumental mixture of equal parts jazz, rock and psychedelia. And you weren’t expecting that, were you?
(Out 25 June on Number Nine Records)