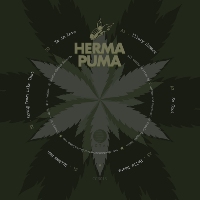 As far as the monkey can recall, that mysterious individual they call Pimpernel Jones hasn’t travelled under the moniker Herma Puma in some time. He makes up for that this year however with two releases using the name, the second of which is this – The Dope EP Vol.1 which is – well – dope. Available in both digital and vinyl 7″ format, what you get on both is a six track EP. Wait, what?! Six tracks on a 45?!!! Ah yes – that’ll be because all tracks have been lifted from the forthcoming Meat Tape beat tape, the purpose of which (like all beat tapes) is to showcase a producer’s talent to emcees in need of grooves. And as those in the trade know, you don’t need four minutes to prove you can assemble a dope verse, hook and bridge. Or even three minutes. Two minutes, perhaps? Nope – you don’t even need that. Actually Herma Puma needs no longer than 1:40 to display his craft anywhere on this release from the summer-soul-powered boom-bap vibes of openerIllary Summer, to the also-summer-soul-powered boom-bap vibes of closer I’m In Love. Do allow the monkey to direct emcees in need to the heavyweight sci-fi groove of Going Down Like That though. Comes in limited green wax with an original acid blotter print from Stateside artist Tom Lowell too. Stick that in your pipe and smoke it! Or perhaps drop that in your Kool Aid and drink it. Actually don’t – as it doesn’t contain any narcotics.
(Cheeba Cheeba Records)