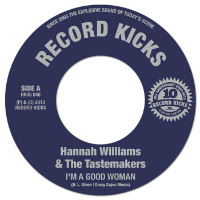 It’s Italian label Record Kicks tenth anniversary this year and one of the ways they’re celebrating is this limited 45 on which the A-side is a cover of Barbara Lynn’s I’m A Good Woman. Now, it’s always a risky business covering a genuine soul sister classic because back in the day, most of the best got their training early (as in when they were kids) in gospel choirs (Aretha, Candi and Marva to name three right off the top of my head) so that as adults they could belt out numbers with unequalled power. So – if you’re going to do it, you’d better have a good woman on vocal duties. Luckily The Tastemakers are fronted by Hannah Williams and what do you know – she’s had gospel training. Over on the B-side are the Crabs Corporation with Susan Cadogan on vocals. Could they have got a bigger female reggae vocal legend on this rocksteady soul cut? Flash bastards.
(Out now on digital, vinyl released 4 February on Record Kicks)

One Response to HANNAH WILLIAMS & THE TASTEMAKERS/ SUSAN CADOGAN & THE CRABS CORP.: I’m A Good Woman/ Day After Day (2013) Video