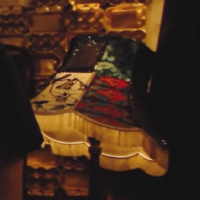 A new year and a new single off the debut LP for Hannah Williams’ new project Hannah Williams & The Affirmations. Yes – soul burner Fighting Your Shadow is the new one – but how to represent it audio visually? Some esoteric martial-arts themed reference to shadow-boxing perhaps? No? A noir-themed video? No? Ah – we’re going for a low-lit, atmospheric, retro split-screen film of the band playing the song live. Nobody mention the ‘vintage’ lampshade in all its patchwork-panelled and tasselled ‘Margot and Jerry’ glory. There it is again. And again. And again! Casting its sinister shadow – like a universal metaphor for our times. Fight it Hannah.
(Out now on Record Kicks)