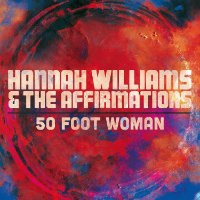 If you thought Hannah Williams & The Affirmations were on a roll before with Jay-Z sampling a track off the Malcolm Catto-produced last LP Late Nights & Heartbreak, wait till you get a load of new single 50 Foot Woman. Could this fuzzy, uptempo soul-rocker be about the high you get from performing live? You know – the one that makes you feel like you’re Allison Hayes after a close encounter with a giant alien humanoid? It certainly could. And produced by Shawn Lee too – as is the rest of the forthcoming album (due on 18 October) off which this is not just the lead single but also the title track.  Why, it’s enough to make you straddle a freeway and cause a car-wreck with your bare hands.
(Out now on Record Kicks)

Posted on 15th September 2019 no comments