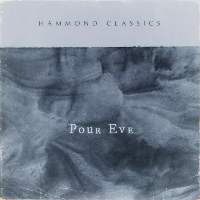 Let no-one accuse Hammond Classics of being a one-track pony when it comes to music production. Over the years we’ve had everything from bashment breaks and reggae to an absolute shedload of Latin breakbeat nuggets.  Not this time though. For new single, Pour Eve, we’re enticed in a downtempo cinematic direction by a piano-led beat overlaid with samples of a Birkin-esque breathy French-language vocal. And if that hasn’t got you worked up enough, towards the end, strings get bunged in as well. How does one follow that? Well, since you’re in the mood now, the answer is with second track Eloisa. Another downtempo affair, wafty strings at the start give way to hazy film dialogue snippets (couple having a tiff? Hope it wasn’t to do with Eve!), lazy trumpets and a loping drum break.   It’s all about the atmos!
(Out now HERE)