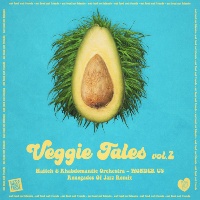 Is it me or does the cross-section of an avocado on the cover of Veggie Tales Vol. 2 look a bit like something else? Er – anyway, let’s not allow that to distract us from the matter at hand which is that the next one in the Little Beat More label’s veggie-food themed series of 45s is out shortly and this time our musical chefs are Nigerian vocalist Hector Edwards (otherwise known as Haitch) and the eight-piece Rhabdomantic Orchestra with psychedelic-afrobeat crossover number Wonder Us. The canny label knows its target audience well though and has correctly divined (see what I did there?) that punters quite like a remix so they’ve co-opted a man who knows a bit about afrobeat, psychedelia, remixing and breakbeats (that’ll be Renegades Of Jazz) to do the necessary. The release is a limited pressing run of 300 copies, 70 of which are in marbled blue vinyl with the rest in black. Oh – and if you want the veggie recipe tip this time (and there’s every reason you would since the last one was super tasty), you’ll have to buy the vinyl because it’s not included in the PR blah on Bandcamp this time!
(Out 9 October on Little Beat More)

Posted on 17th September 2020 no comments