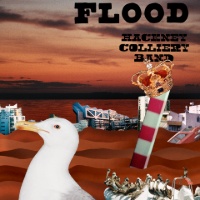 Hackney Colliery Band reclaim the metaphorical rights to the word ‘flood’ from anti-immigrant bigots on new single – er – Flood. As ever, they deliver a big stomping slab of brass band dancefloor action with the track turning on solid funky drums and triple soul diva mic assault from Yvette Riby Williams, Selena Seballo and Joanna Christie. But what ‘flood’ can they be on about? Turns out it’s all that negative bullshit spouted about by said bigots about the less fortunate. What’s that ladies? “Before it was a trickle/ Then it was a flood/ Now we’re nearly drowned we’re doing something like we should.” But how did we come to such a pass? “We always seem to miss the signs or pressures building up. The masses kicked to the kerb will have their vengeance.” Blimey, don’t let the Daily Hate get hold of this, you’ll be classed as ‘enemies of the people’, for which read, ‘enemies of those who don’t pay their taxes’.
(Out now HERE)

Posted on 21st February 2022 no comments