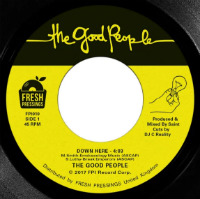 It’s the return of Saint and Greavsie – oops my bad – Saint and Emskee, a.k.a. The Good People, with a new wax nugget. On Down Here, Saint concocts a hefty funk-sampling beat so that Emskee can hold the floor on the topic of keeping it real way down ‘here’ in the hip-hop underground while Game In The Step is an altogether jazzier affair inna Tribe Called Quest stylee. Naturally, this is coming out on vinyl but the format is the still-trendy seven inch rather than the rock-solid, wax platform that is the traditional hip-hop twelve.
(Pre-order now. Out on Fresh Pressings late June)