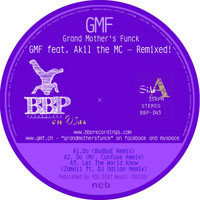 “Do whatever feels good to you. It’s cool/ For you to do whatever you want to just do,” raps former Jurassic 5 member Akil The MC on the original Grand Mother’s Funck version of Do (video below) – with admirable laissez-faire as his and the band’s work is taken off by Badboe and various nu-funky friends. Perhaps surprisingly, the end result isn’t a six-track ‘loud-up the drums, wobble the bass until your speakers blow free-for-all.’ That’s not to say that DJ Farside doesn’t do precisely this for Party All Night or that Breakbeat Junkie hasn’t made a heavy breaks effort with the same track but elsewhere things are a bit more mellow. Well, I say mellow – Zamali and Dj Odilon are on a b-boy breaks tip with Let The World Know but Kalumenos’ rework of Your Thang gets G-Funky, while Mr Confuse’s hip-hop mix of Do has a stoner West Coast feel for all those missing J5. It’s all about Badboe’s party breaks remix of Do for the surest feelgood dancefloor filler.
(Out now on BBP)