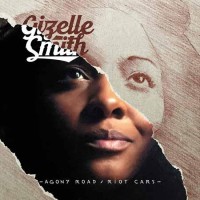 Mighty Mocambos singer Gizelle Smith drops two new cuts off the spring’s Revealing album with the release of the moody Agony Road and the even moodier Riot Cars – a.k.a. that LP’s opener and closer respectively. The former is powered by a driving funk beat featuring guitars and a lyrical exploration of the seven stages of grief. The latter opens with creepy FX that gradually fade into piano tinkles and smouldering organ chords before returning as a loping beat and the bass kick in. Despite the title and a surprising amount of rather grungy guitar chucked in among the drums and the grooves, the ensuing lyrics aren’t about either petrolhead fantasies or some sort of teenage computer game and reflect again the emotional circumstances (the death of Smith’s soul singer father, Joe Smith) that prompted the writing of the album from which both tracks are drawn and also reflect the creative reboot that said album displays.
(Out now on Jalapeno Records)