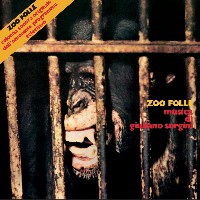 As the release of Giuliano Sorgini 45 Mad Town/ Ultima Caccia (note to self – spell that B-side correctly this time!) indicated back in January this year, a full release of Sorgini’s Zoo Folle OST is something to get very excited about. This isn’t the first time the LP has been released on wax but this double album version contains both the originally released soundtrack on the first two sides along with another two sides of unreleased material including alternate versions of LP tracks.

The Zoo Folle (i.e. ‘Crazy Zoo’) OST was originally created by Sorgini in the early 70s at the request of TV director Riccardo Fellini (brother of La Dolce Vita director Federico) to accompany his three-part documentary about conditions for animals in the zoos of western cities. As a consequence, Sorgini gained access to the Fona Roma studios (apparently not an easy task if you weren’t Ennio Morricone) and laid down an epic score that ranges from the stripped-back tribal drum breaks of Ultima Caccia, through the orchestral manoeuvres of the title track and Chains, to tracks that combine both aspects – like Amboseli and Roma Londra Parigi. The second half of the LP is where you’ll find alternate versions of the title track, Red Old Skies, Roma Londra Parigi, Chains, Space And Freedom and Amboseli – the latter in its originally intended ‘composer’s cut’ length of nearly fourteen minutes – as opposed to the originally released LP’s mere six minutes. Four Flies Records have done a top job getting everything re-mastered from the original tapes and this drop should only serve to increase Sorgini’s reputation.
(Out 23 September on Four Flies Records)

Posted on 19th September 2022 no comments