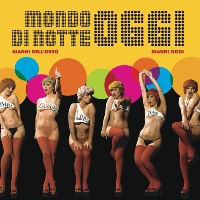 There’s re-release heat right here on this vinyl 45 which picks the two funkiest cuts from the soundtrack to Gianni Proia’s Mondo Di Notte Oggi composed by Gianni Dell’Orso and Gianni Oddi. That’s a lot of Giannis, I think you’ll agree, though I have it on good authority that other Italian male first names exist. These two cuts are attributed solely to Dell’Orso who clearly captures the vibe of the famously exploitative Mondo movie genre (also conveyed via the cover) in his flute-drenched afro-funky Soul Meeting on the A-side. It’s a cut that all but bends over in front of you while looking back over its shoulder, finger to lips and a cheeky expression of mock surprise on its face. If that’s not saucy enough though, check out Teenager on the flip – an even more louche, wah-wah infused groove – albeit with a far more questionable title, given the context.
(Pre-order now/ Out 9 July on Four Flies Records)