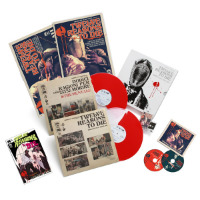 New Wu. Who knew? Actually, quite a lot of people but since Murder Spree off the forthcoming Ghostface Killah/ Adrian Younge LP 12 Reasons To Die only got leaked last night you might not have heard that yet – vid below. The album comes out on RZA‘s Soul Temple imprint in collaboration with the Get On Down label which has lately become synonymous with deluxe re-releases of classic hip-hop. And while 12 Reasons To Die is brand new rather than a re-release, there’s no doubt about its deluxe credentials.

There will be several versions and formats (including cassette and limited box set vinyl) which are accompanied by things like a Tony Starks comic and a poster – the Murder Spree product video depicts the hand screen-printing of one of the covers of the limited run of 500 vinyl for example. According to the PR it’s “A brutal tale of gangsters, betrayal and one vengeful soul hunting the 12 most powerful crime lords in the World.”. Yeah, alright mate. What you need to know is that this sounds like classic Ghostface over classic, minimal dusty RZA breaks. Except – wait! Those aren’t samples! No. All the music on the LP has been composed and produced by Adrian Younge who did the soundtrack to 2009’s blaxploitation spoof Black Dynamite.
(Out 30 April on Soul Temple/ Get On Down)