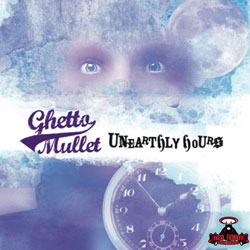 Unearthly Hours finds the band with one of the filthiest names in music end up where I suspect they might have been heading from the start. To put it another way – if last EP Sunday Morning Hangover saw instrumental hip-hop flirting with techno, this time around it gets its comeuppance with techno giving hip-hop rather more than a come-on. Where are we? That’s right – Warp Records territory. The beats might still be syncopated but they clank, buzz, and stutter like androids in a jacuzzi. As the title would suggest, Unearthly Hours is the sound of a party at five in the morning where the front room’s full of empty fast food cartons, a motionless haze of waist-level blue smoke and someone with dreadlocks has fallen asleep while trying to roll a spliff. It’s very accomplished, if that’s how your ears get off, and should probably be the soundtrack to some low budget US indie flick. Preferably one shot in grainy black and white about a paranoid Phd student who inadvertently discovers how to rig the US stock market via the internet but can’t cash-out because every time he thinks about turning on his computer he knows they’re watching him. Or something.
Out now on Red Robot RecordsGhetto Mullet – Myspace