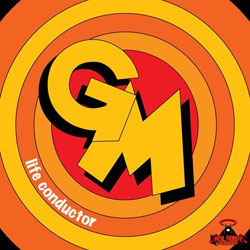 Purveyors of fine ‘clicks and cuts’-based breakbeats since a couple of years back, the most sleazily-named outfit in the world return to smack your glitch up with their first full-length LP. Life Conductor sees the sound of stutter funk maestros Kev Guy and Ben Carver come of age in a concise little package (the LP is only nine tracks and a little over half an hour long) that steps up, commands your attention and then disappears again before you’ve had a chance to take it all in.
For those who’ve been mulleted before, it’s pretty much business as usual though perhaps the brevity of some of the tracks (this has nearly twice the tracks of their debut LP but is only 5 minutes longer) lends it an edge of accessibility in a genre which often frequently demonstrates how the instrumental can overstay it’s welcome. Opener Alien Intel manages to come on a bit like the Knight Rider theme over a punishing pitch-bent bassline and epileptic machine-gunner percussion. In fact, the use of samples in this track is typical of an LP which is packed full of samples that remind you of something, or might actually be that thing and yet they’ve been messed with and cut up to the that you’re never quite sure about them. It’s a bit like when you think you recognise someone but aren’t sure if it’s Dave that you used to work with or just someone who looks like Dave – if indeed ‘Dave’ was his name.
Knob To Eleven invites you to do just that by slowly building into a hypnotic pulsing, stop-starty beast and then there’s the digitally flatulent Radio Ransack which judiciously applies just the right snippets of an already cut up soul sample. The biggest props however have to be reserved for the glitch funk of the shortest track In The Mind however, which is catchier than a Velcro beard brush – were such a thing to exist. Time Ticks makes extensive use of a rapped loop and like many of the beats on this prompts the listener to consider why hip-hop producers don’t bother using drum patterns this interesting or to put it another way – whether the ‘Mullet have ever considered roping someone in for mic duties. Nice work. While you’re waiting for it check out the Sounds Of The System (track 5 on the LP) vid below links…
(Out 14 June on Red Robot)
Listen to Ghetto Mullet – Life Conductor
Ghetto Mullet – Myspace