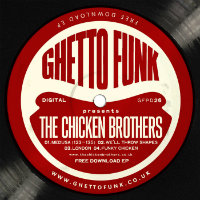 It had to happen sooner or later I suppose – the perfect storm of Breaking Bad influences colliding with electro-swing and ghetto funk. Meet The Chicken Brothers, that most English incarnation of Los Pollos Hermanos in whose studio something party breaks-wise is always cooking. Wobbled-up Lord Kitchener? Eggspect it. Electro swing and dnb in the same track adorned with samples of hens? You’d better clucking believe it. A noirish ghetto breaks tale by way of 90s soul? That’ll be the hatch-trick. But what about that fourth track? No! They wouldn’t dare…surely no-one would dare…would they? Er – well yes they would dare. Not only would dare but have dared. The Chicken Brothers have given a ghetto funk makeover to Rufus Thomas’s Funky Chicken – no poultry gesture, I think you’ll agree.
(Out now on Ghetto Funk)