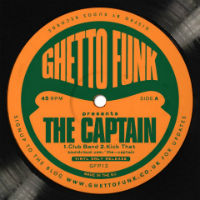 The Captain a.k.a. Italian breaks producer Fab Samperi, is a man known for his wide-ranging voyages across the seas of breakbeat-related music. He seems of late to have been cruising mostly in ghetto funky waters though. Aptly enough, really, since here he is with a party ship of an EP on the Ghetto Funk label. It’s all very modern with wobbly bass and those drop thingies and suchlike and he’s kept it euphorically hands-in-the-air by sampling Sergeant Pepper’s Lonely Hearts Club Band, Stray Cat Strut and what sounds like Sister Nancy’s version of the Bam Bam plus about an album’s worth of source material on Kick That including The Meters’ Handclapping Song. The ghetto funk massive will be on it like a car bonnet. Or whatever the nautical equivalent is.
(Out 28 January on Ghetto Funk)