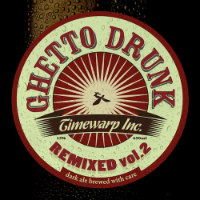 Timewarp Inc.‘s Ghetto Drunk LP from back in February gets a another whirl around the remix tree on this second volume of remixes which travels (not unsurprisingly) by the name of Remixed Volume 2. This time it’s the turn of Umbo, Soopasoul, mSdoS, Apedroid, Angel Funke, Atfunk, Trotter, Gabriel Rocca, The Spank!, and MustBeat Crew to put their own unique spin on tracks from the original LP release.

That original LP contained fifteen tracks plus a revisit of one of them. Nine of these were remixed for Vol. 1 (some of them several times) resulting in thirteen actual remixes. Vol. 2 however contains remixes of only seven original album tracks but totals fourteen tracks in all – some of which had already been remixed for Vol. 1 and four of which are instrumental. So that’s fewer tracks remixed but more tracks overall for the numerically challenged – most of which seem to be versions of the funked up breaks of the title track. Not that I’m complaining you understand since two of these are the standouts. That’ll be either the alternate version of the title track which replaces Tonkin’s polite nufunk vocal with the Ragga Twins – and is all the better for it – or Soopasoul’s arguably even better rerub of the same (also featuring the Ragga Twins) which goes off for the same reason. Beware of Atfunk who goes all house-y and The Spank!’s latin Moombah effort and head instead for MustBeat’s cracking ghetto funk version of Kraakin and Umbo’s gritty funk breaks rework of Kotzak.
(Out 2 December on Timewarp Music)

Posted on 12th November 2013 no comments