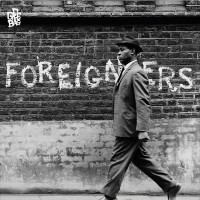 Last seen round these parts on the Jim Sharp remix of the Revive Rap 7″ feat. El Da Sensei, Gee Bag here takes centre stage on the Ill Informed-produced Foreigners. Out shortly on 45, the track is lifted from last year’s Gee Bag X Ill Informed LP Respect Ya Elders! and pulls no punches at all in its excoriating attack on twenty-first century racism in the UK which continues to make black British people feel like aliens in their own country. The message is conveyed over a boom-bap beat featuring a female soul vocal motif and underscored by a video montage. This latter juxtaposes images of the Windrush, those arriving on it and their treatment from the likes of the police, landlords and Enoch Powell. On the flip, producer Sam Krats is on hand with the remix – this time a sparser slice of piano-featuring boom-bap and a whole new video featuring Gee wandering through contemporary London and occasionally juxtaposed with footage of those who are now community elders. All of which serves to drive home the lack of change in what has now been seventy-three years (!) since the arrival of the Windrush.
(Out 12 March on Dinked Records)

Posted on 26th February 2021 no comments