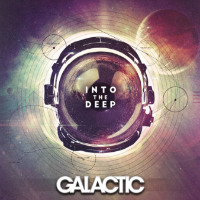 New Orleans funk band Galactic are now streaming new single, and Macy Gray-featuring title-track of their forthcoming album Into The Deep. The PR blah says that they have been, “exploring…seemingly limitless musical possibilities for more than 20 years…[and]…consistently pushed artistic boundaries,” an approach manifested here as AOR drums, subdued guitar and heavy emoting from Macy on a soaring strings-drenched chorus which has ‘ad-synch’ writ large upon it and less in common with the output of The Meters than of Adele. What you might call rolling ‘Into The Deep’, then. The album follows in the middle of next month and features a number of hook-ups including one with Mavis Staples which might be worth a look-in.