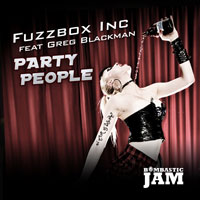 Fuzzbox Inc. are an outfit known for their funky breaks and according to the PR, their latest Greg Blackman-featuring single Party People stays true to their ‘unique funky style.’ When I had a listen though, it sounded like they’d gone off piste. And when I say ‘off piste’ I mean ‘away to a pill-fuelled orgy in the rough direction of the Balearic islands.’ They’re not the only ones at it either since the Fort Knox Five remix (for all the fact that they’ve added a filtered wah-wah to the original four-to-the-floor beat) also sounds suspiciously like it was trying to ‘house’ me. All is not lost to the dark-side however as Terminal State is on hand to apply some straight up junglistics in his remix and B-Side reduces Blackman’s vocal to the hook, foregrounds that nice organ loop from the original and finally brings the breaks.
(Out now on Bombastic Jam)

(PRESS RELEASE)
Our boys from Jersey are back once again with their second full original release on Bombastic Jam. Staying true to Fuzzbox INc’s unique funky style, they have recruited the vocal talents of Greg Blackman, not to mention having picked up some killer remixes by some of the top producers in funky mid-tempo breaks. The release includes the forefathers of modern day funky breaks, The Fort Knox Five (US), up n’ coming rising Ghetto Funk star B-Side (UK), and last but not least, a remix from Fuzzbox’s Jersey neighbourhood friends Terminal State (UK) switching things up a bit with a solid Drum n’ Bass remix which rounds the package off nicely indeed.

Posted on 20th September 2011 no comments