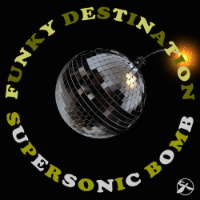 The mirrorball-with-a-fuse pretty much captures it on the cover art of Funky Destination‘s second full-length effort Supersonic Bomb which contains seventeen original cuts of solid nufunk action featuring live instrumentation and vocals. There’s a heft and chunk to this that other nufunk drops often lack and it’s the sort of thing you might file alongside Quasamodo or early Basement Freaks material. It’s certainly as eclectic in its influences drawing beyond seventies funk from disco, blues, afrobeat, drum n bass, and jazz – and often a combination of two or more of these on any given track.

Best cuts include the funky breaks of opener Funky Music Overdose and We Gotta Keep That Mojo Rising, the pumping Do You Like Disco, the slower Doors-do-breaks groove of Feeling Love and the b-boy soul of You Gotta Shake It All Up feat. Soul Power Sistas. Props also surely due to top notch mastering from Timewarp man-man Angelos ‘Timewarp Inc‘ Stoumpos.
(Out now on Timewarp Music)