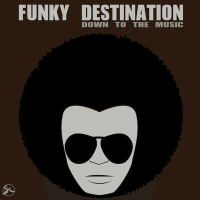 Unlike many another artist, there’s no claiming that his music will take you to a funky location for the unusually-monikered Timewarp-signing Funky Destination. Oh no. He’s claiming he actually is that very place. Nevertheless, despite having thus cruelly deprived his own music of a purpose, the Down To The Music EP still manages to deliver two tracks of respectable nu-funkified disco breaks before wandering off into the nu-jazzbo suburbs of United Colours Of The Sun for a noodle and a scat and (you’d like to think) furiously trying to flag down a taxi to return it to central ‘funky town’ or at the very least ‘the bridge’.
(Out now on Timewarp Music)

Posted on 9th October 2013 no comments