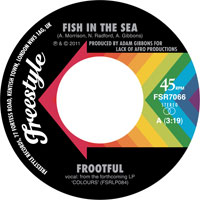 In which we find a record label (Freestyle) more typically known for their funk output delve slightly further back into the past with their championing of Frootful whose Fish In The Sea channels original stomping early-sixties’ rnb with convincing proficiency. I’m not suggesting for a minute that ‘funk fatigue’ has set in at Freestyle Towers – we all know where that leads – that’s right – rockabill- er – I mean jump blues (stand up Keb Darge, Andy Smith and Cut Chemist) more that they like to spread their love around the retro-genre universe. In case you were wondering, Frootful is guitarist Nick Radford, ably assisted on this by Lack Of Afro’s Adam Gibbons and the very capable vocals of Angeline Morrison. If this gets your mod on – there’s an LP on the way too – full press guff below. Don’t suppose there’s any chance of a funk remix…?
(Out 7 February on Freestyle)

(PRESS RELEASE) Freestyle Records is very proud to announce our first release of 2011, a cracking, rhythm & blues tinged 45 single, suitably from brand new signing: Frootful – the name that guitarist Nick Radford works under, which also features the production and instrumental skills of his regular partner in crime, Adam Gibbons aka Lack Of Afro.

Fish In The Sea has its roots stuck in the early 60s transition from R&B to soul, and features the wonderful Angeline Morrison on vocals. The hand-clapping, foot-stomping groove is made all the heavier with some solid horn arrangements by Adam. The flipside is an instrumental version that is totally exclusive to this 45, and features Nick’s tasteful guitar soloing and some sweet flute which simply swings – beautifully.

Taken from the forthcoming album: Colours (FSRCD/LP084) the Frootful project bridges the gap between past and present, acknowledging influences, while reflecting the creative process of looking back to move forward. Such influences include 60s soul jazz, latin, ska and R&B.