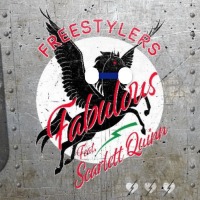 Freestylers’ forthcoming Other Worlds LP looks set to nail the band more crossover success as they follow the pop-drenched breakbeat stylings of previous single Happiness with the equally pop-drenched breakbeat stylings of Scarlett Quinn-featuring new single Fabulous. According to the PR, the band had been feeling a bit nostalgic but rather than small boys in the park, jumpers for goalposts and rush goalie they’ve plumped for fat drum breaks along with 80s musical and vocal stylings. In doing so they manage to pretty successfully marry the sound of their own early 90s material with the sort of nostalgic funk business in which the Pharrell, Mark Ronson and Bruno Mars occasionally like to dabble. Fabulous.
(Out now on Mama’s Pie)