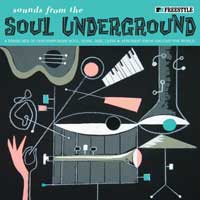 It’s not just the monkey doing it you know, Freestyle Records are at it too – although the monkey likes it a bit dirtier and doesn’t mind if those involved want to do it with computers rather than other people. No, not that! Wash your mind out you pervert! I’m talking about soul/funk-related compilations.

Freestyle’s is called Sounds From The Soul Underground – seventeen slices of contemporary retro soul which taps into everything from boogaloo, to rnb (the mod sort not the Pariah Carey sort), afro-beat, funk and b-boy breaks. Highlights include Jo Stance with vocal Dusty-a-like singer Johanna Forsti and debut single Hey Girl, the man with the Fania plan – Ray Lugo and his boogaloo bomb Sol El Ray and my man Renegades Of Jazz (who, incidentally, is the only person on this comp. to also feature on monkeyboxing’s one too) with his spy-jazz take on b-boy breaks. Lest you thought Freestyle had forgotten about funk filth it is represented by The Haggis Horns in their best JBs/ Maceo & The Macks mode, Hungarian mod-funkers The Qualitons and the Killer Meters with their ‘Betty-Davis-does-Gwen-McCrae’ version of Cramp Your Style all of which you’ll find at the end of the album providing an incendiary finish to proceedings. There. That should give any UK-based readers a bit of musical sunshine to look forward to in the absence of any actual sunshine for the foreseeable future…
(Out 27 Febuary on Freestyle Records)

Listen to Sounds From The Soul Underground HERE