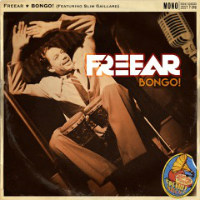 The new one from Slamboree founder Freear is his glitchy, electro-swingy effort Bongo! which makes prominent use of a Slim Gaillard sample. Seems harmless enough. So who can fathom the mind of the one whose video concept for this was to track around Bristol following a man hunched double, back exposed with a marker pen cartoon face on it and a giant strawberry blond afro wig dangling forwards from his arse. Not me for one. Harrassment by drunks and skaters in the St James Barton ‘Bearpit’ follows but things don’t get properly weird until our hero opens a door in the ground in nearby woodland which leads down into a club. By which time we’ve all learned something about the perils of listening to electro-swing.
(Out now on Freshly Squeezed)