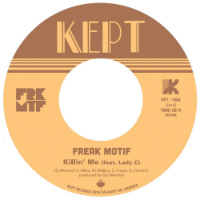 Funk from Alberta? How times change. Back in the 90s I was at a party somewhere south of Edmonton where everyone was taking turns at selecting the music. They played a bit of both kinds – country and western, so when it was my turn I tried a funk-sampling Deadly Avenger cut. It lasted twenty seconds before some hick from Fairview shut it down sneering, “What’s this fucking Michael Jackson shit?” Not that I took it personally or anything. Bizarrely, the only person open-minded enough to defend the funk and hit play again was a real cowboy. So let’s hear it for Calgary’s Freak Motif then, who aim to cause a stampede for the dancefloor by applying a little freak power and creating this tight little JBs/ Vicki Anderson style number with the help of Lady C.
(Out 1 July on Kept Records)