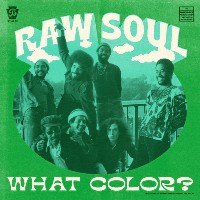 It’s stanky no-prisoners funk time here on Brewerytown Records re-release of What Color by Frankie Beverly’s Raw Soul. Alternately-titled Color Blind, this cut from 1971 is re-released with a previously unheard instrumental take and Brewerytown Records got both versions mixed and remastered in stereo by veterans Tom Moulton and Peter Humphreys using their experiences from being there in the seventies. The music is heavy gritty funk of a kind that that recalls the likes of Creations Unlimited’s Corruption Is The Thing, though the topic being addressed on this one is racism rather than venality. Since even good secondhand copies of the original 45 are going for over a hundred squid and they don’t have the instro on them and aren’t in stereo, this is about as essential as 45s get these days if you’re into funk.
(Out now on Brewerytown Records)