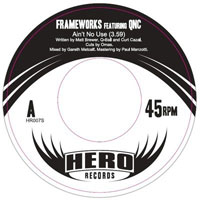 Another transatlantic collabo between veteran NY rappers Q-Ball and Curt Cazal and a UK producer, only this time it’s Frameworks rather than Aim. And equally dope. Don’t go expecting Aim’s moody beats though – Frameworks keeps it crisp and funky on both sides. Both cuts clock in at around 100 bpm, Ain’t No Use is a bit lighter on it’s feet and sees QNC air their thoughts on current hip-hop (they’re not too keen) “Every time I put my mic down for a minute I hear some wack shit that make me wanna come spit it…” while Classic is heavier and punchier in every respect as they drop battle rhyme broadsides like “I am on a journey, you are on a short trip/ My crew is corporate what you do is horseshit” and “You are like them back seats, far from the action/ Record release – sub-par reaction.” Take that wack rappers! Digi-version comes with instros and acapellas.
(Out 16 July on Hero Records)