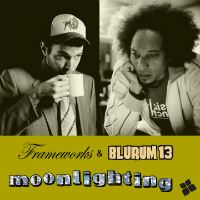 Reliable transatlantic hip-hop duo Frameworks & Blurum 13 release a new single off the rather solid Brickbuilders LP and it’s latin-tinged slab of musical masonry Moonlighting. Blurum’s lyrical focus is less his post-dayjob work in the studio however, than what happens when he pops into a bar en route. One glass of blackberry lemonade down and he’s all spun out by the hypnotic eyes of a woman on a poster behind the bar who resembles an ancient middle eastern goddess. Or something. Blackberry lemonade? Electric Kool-Aid more like. Meanwhile Frameworks’ switches from latin piano over earthmover bass for the verse to something that sounds a bit like the theme tune to The Good Life over earthmover bass for the hook. Not sure Blurum’s the only one who’s been on the ‘blackberry lemonade.’ Works for me though! Herma Puma are over on the flip with a rerub of What You Gonna Do?
(Out now on My First Moth Records)

Posted on 1st October 2013 no comments