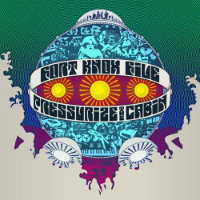 Not to be confused with the EP of the same name released earlier this month (although confusion would be entirely reasonable – said EP being a taster containing four ‘dj-oriented songs’ drawn from the ten cuts off here), Pressurize The Cabin is a ten-deep new set of original material from Fort Knox Five. And just in case you were concerned that the EP cherry-picked the only ‘dj-oriented songs’ in the set, let’s put that one to bed – which, incidentally, is the last place listeners will be when this is playing – because they’re all dj-oriented songs. Not only that but – apart from the psychedelic breaks of closer Mission To The Sitars – they’re all vocal tracks too.

For anyone familiar with its predecessor (2008’s Radio Free DC), Pressurize The Cabin will sound very much like the band have simply re-fuelled mid-air (albeit after an immensely long flight) and continued on their merry way. Sleepy Wonder and Mustafa Akbar are once again present and this time joined by fellow Washingtonian Flex Matthews as well as Empresarios, Vokab Company, Crown City Rocker Raashan Ahmad and Ashley Slater of Freak Power (and, more recently, Kitten & The Hip) fame. Generically the LP charts a course through 90s style hip-hop, electro swing, fat electro funk, uptempo dancehall skankin and the aforementioned psychedelic breaks and such is the vibe that you’ll likely be happy to continue circling planet breaks until the next re-fuelling tanker hoves into view. Check it on the humble Juno player below and cop a free download of the title track too! N.b. Looks like you’ve got to click through to Soundcloud to access the DL off the player.
(Out 28 April on Fort Knox Recordings)