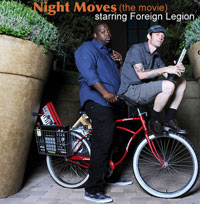 And you thought Foreign Legion’s third LP Night Moves was just one of last year’s most underrated underground hip-hop releases. Think again sucker. Rappers Marc Stretch and Prozack Turner also made a feature film to accompany the album that has hitherto only had limited screenings. Shot in black and white, in a…er…string of comedic dialogue-based ‘cinema verite’ set pieces, the ensuing 45 minutes provide a sequence of world class lessons in bullshit and blagging as our chancer heroes struggle to get their hands on the masters for their just-finished album which producer G Koop is holding hostage until he gets real paid.

Along the way our heroes are roped into a video shoot set up by Stretch’s camp-but-suicidal battle rap-loving ‘number one fan’ (“people are going to think we’re studio gays…if it gets out that we’re not gay!”), endlessly rip-off the hapless G-Koop and end up on the wrong end of a vice-squad sting. Plus there’s the hilarious meeting with their manager who compounds the bad news about a potential Lyrics Born/ FL collaboration (“he’s not a fan”) with the suggestion that, because he has a “nice place”, if they want to work with him they could do some ‘yard work’ in lieu. Cue Turner’s priceless “I’m not pulling Lyrics Born’s fucking weeds at his house dude.”

Soundtracked throughout by the LP’s mix of lounge-hop and funky California party bumps Night Moves is an as-lo-fi-as-you-can-get-without-filming-it-on-your-phone (and I wouldn’t put that past them) hip-hop mix of Spinal Tap, The Office and Alan Partridge – that the band are billing as, “the funniest movie since Philadelphia.”

Turner will appear on Oh No’s new LP Ohnomite released on Stones Throw later in the month and there’s also, allegedly, a new FL release due in the summer. Well, I say ‘in the summer’ – with this two’s usual approach to deadlines you can probably expect new material around 2015. It’ll be dope though. Maybe by that time they might even have bothered to set up a soundcloud or bandcamp page.