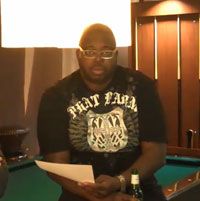 I saw a billboard advert for deodorant in Canada once. The slogan was, “So dry, people will think you are British.” It’s an epithet which could equally apply to Foreign Legion in this, the second part of a three-part interview (part 1 HERE) which monkeyboxing attempted to conduct with those ‘intangible emcees’ Prozack Turner and Marc Stretch. I say ‘attempted’ since they were continually out of their seats, did not listen to a word I said and demonstrated a flagrant disregard for serious answers. What is wrong with kids these days? Despite this, they continued to reveal all – though not necessarily (in fact, rarely) about what they were asked and indeed at points – were you to see the outtakes – far too much. Anyway, have a gander at the ‘Stretch & Turner Show’ and when you’re done – download the excellent Red Eye Flight mixtape (mixed by Marc Stretch his bad self) HERE.