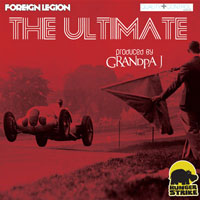 Still keeping it hotter than block parties in hell, it’s the imminent return of the FL! It says here that new FL single The Ultimate is a slow lane banger. If that seems a bit oxymoronic check Grandpa J’s woozy Asheru & Blue Black style horns-infused beat and you’ll get the picture. Marc Stretch and Prozack are back and – while I hesitate to announce much–delayed full-length LP Night Moves yet again, it is, allegedly, finally, due to drop, on April 12 this year, several millennia since the original announcement of its release. Check back with the monkey to find out whagwaan with all them delays in the upcoming Foreign Legion interview. Meanwhile (also, incidentally, the name of a classic Foreign Legion track) listen/ cop the new single below, check the video below that and finally…full press guff below that:

(PRESS RELEASE) The Oakland, CA-based Foreign Legion return from a four year hiatus to drop their brand new studio album “Night Moves” on April 12, 2011 via HungerStrike/Quality Control Digital. The veteran duo of Prozack Turner and Marc Stretch return with “The Ultimate,” the second single off the album. The 15-year veterans to the Bay Area/Los Angeles hip-hop scene can’t go wrong as they display old school bravado combined with modern day braggadocio, to make an album full of next school anthems.

‘The Ultimate” is Foreign Legion’s grand return to the scene. The Grandpa J produced slow lane banger starts back where they left off. “I’m like Rocky 6 bitch, I don’t know when to quit. I’m too old for this shit, but this is all I live for,” Prozack Turner exclaims. The hook includes a well timed Nas sample which is seamlessly blended with a voice proclaiming that we “All Hail the Ultimate.” Marc Stretch continues, “Well past the last station of your train of thought, all aboard on all accords.” New heat for their long-term fans, and a reintroduction of sorts to the original Oakland, CA based hip-hop odd couple.

In their own words…”When you are in trouble you call the police. When the police are in trouble, they call SWAT. When the world’s music playlist is in trouble, call Foreign Legion. “The Ultimate” is a shining example of feel good, rhyme great music. Come take a flight with Hip-Hop’s caped crusaders, over a mellow Grandpa J production. Bad music is definitely in trouble.” Yes indeed, Foreign Legion is back.