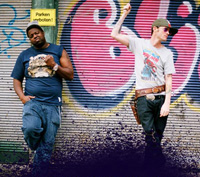 Read Night Moves album review here
(PRESS RELEASE) The cliched phrase “hip hop is dead” has been dismantled by Oakland California hip hop crew Foreign Legion with their new album, Night Moves which is dropping April 21st some time in 2009 (having been delayed again for unspecified reasons) on Hungerstrike records! The 13 song, full-length masterpiece figuratively kicks it’s hip hop rivals in the nuts with soulful horns blasting in your face, and thick-as-honey basslines drenching your thirsty soul! Produced by Prozack Turner, DJ Flip (Ireland),DJ Buzz (Austria), G. Koop, Oh No, Grandpa J and Introbeats (Iceland), the album is exactly what underground hip hop is hungry for! Recorded, written, and produced completely at night in three countries over ten months, Night Moves is sure to make noise in the nocturnal circles of the worldwide hip hop underground! “We wanted to make an album that represents some of our darker thoughts, both literally and metaphorically, so we decided to experiment and do all the creating, recording and mixing at night” said Marc Stretch, lead emcee of Foreign Legion. Producer and fellow emcee, Prozack Turner had this to say, “Both Stretch and I were very busy in the daytime hours, with me working at the check-cashing place and Stretch doing his day gig (Stretch is the daytime DJ at a local San Francisco strip club) that the only time we had to work, was at night. Even when we recorded on tour, it was in the late hours. This album was 100% made at night.” The group is releasing a single in late March, don’t sleep!

Foreign Legion also just returned from this year’s South By Southwest music festival in Austin,Texas! The boys would like to thank all the fans who came through and helped burn the venues to the ground! Special thanks to Ravi, the manager of Ramada Limited for his patience regarding the noise and the naked cannonballs off the roof into the pool, (who knew pizza could float?) and also to Sgt. Stephani for being cool about the “smoke” and open containers!