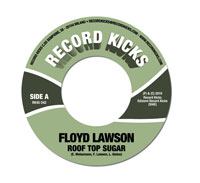 It’s always nice to have break isn’t it – you know, crafty fag, cup of tea and some digestives? Former Motown soul singer Floyd Lawson certainly likes time out anyway – he’s just returned from a thirty-five year skive. Thirty-five years!!! That must have been one epic cup of tea! As we all know, while Olympic-level break-taker Floyd had his feet up, it’s all been going on: sampling, punk, hip-hop/rnb taking over world, the rise and fall of CDs, the rise of the digital age, the advent of wobbly basslines and Simon Cowell’s cheese factory. Unconcerned, the man saunters back into the studio and discovers that, er – actually quite a few people still like (and make) northern soul. Cue his forthcoming single on Record Kicks demonstrating the smooth funk of Roof Top Party and the classic, chilled soul of B-side I Ain’t Going Nowhere. Keep your eyes and ears out for news of the album dropping in 2046. P.s. Might have made that last bit up…
(Out 2 February as 45/Digital download on Record Kicks)
LISTEN to FLOYD LAWSON: ‘Roof Top Sugar’ b/w ‘I Ain’t Going Nowhere’

(PRESS RELEASE) After almost 35 years since his latest release, ex-Motown soul singer Floyd Lawson prepares his return on the scene with two brand new tracks on RK! Record Kicks proudly presents the first new single in over 35 years by ex-Motown recording artist Floyd Lawson. Floyd Lawson & The Hearts Of Stone popped up on Motown’s subsidiary VIP label in 1970 with debut album “Stop the World: We Wanna Get Off”. Just over half a decade later, and after moving to Quebec, Floyd and the group recorded second full-length “Coming Out”, which remained unreleased until Canadian label AfroKats Records reissued a limited bunch of LPs in 2007. Crossover soul gems “Kgee” / “It Only Takes A Minute Girl” and “Air I Breathe” / “Rated X” were extracted from the record and released on Record Kicks 45s.

Now, 35 years since his last album was recorded, Floyd Lawson goes back to his roots and releases two brand new tracks on RK. On side A we find the upbeat “Roof Top Sugar”, a sizzling slice of funky crossover soul with a party vibe and festive atmosphere, backed on the flip by soulful midtempo tune “I Ain’t Going Nowhere”. With a fresh edge for 2011, we have no doubt this 45 marks a new chapter in Floyd Lawson’s musical career. It’s official folks, the soul king is back in business!