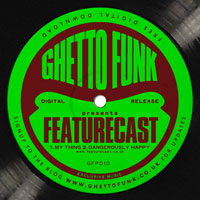 This free two-tracker (digital 45 anyone?) from the Ghetto Funk label reveals that for the first track Featurecast did a dawn raid on what is arguably the most famous number from funk legends the Isley Brothers and (let’s be honest) one of the most famous funk tracks of all time – It’s Your Thing. Every bugger’s covered it from the Jackson 5, to Aretha, responded to it (James Brown and Betty Moorer) or sampled it (Salt N Pepa) so it’s long overdue for a breaks wobble version. Over on the digital flip is Dangerously Happy where Max Sedgley’s first single from 2004 gets the same treatment. It’s all about the run-up to forthcoming Featurecast LP Run For Cover. Cop both tracks off the players below: