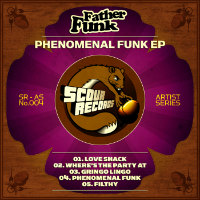 Father Funk continues his current roll and I don’t mean that stale bap that he’s been surviving on during epic ‘computer vision syndrome’-inducing bouts on the music production software recently. The modestly titled five track Phenomenal Funk EP is aimed firmly at the dancefloor and gives what you might call the warp and weft of breakbeat music a healthy exploration, ensuring that the funk and the wobble are present in equal measures in the respectively disco, electro, latin, 80s funk, and neo-soul influenced cuts.
(Out 30 October on Scour Records)