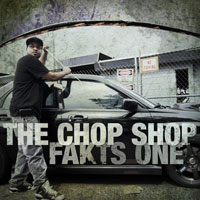 “Where the bloody hell have you been?!” For those not in the know, DJ/ producer Fakts One used to be one third of the Perceptionists – the other two members being Mr Lif and Akrobatik. They made a really good LP called Black Dialogue six years ago shortly after which Fakts One pulled a spectacular disappearing act for reasons much-speculated about. Three years ago, his delayed debut LP Long Range got a well-received released but Fakts remained m.i.a. Until now. All of a sudden here is with an LP of fifteen free, sweet, instro nuggets culled and chopped from ancient vinyl sources to say sorry. Not a dickie bird about where he’s been though – let’s hope the LP cover isn’t a coded clue since he looks like some shifty teenager on the rob. Cop it below:

(PRESS RELEASE)
Fakts One, long-lost member of the Perceptionists (along w/ Mr. Lif & Akrobatik) has announced the release of his first recorded music in over 3 years. Fakts last release, Long Range (2008, Green Streets/Nature Sounds) received critical acclaim despite being released long after completion. Many thought he’d never be heard from again – but Fakts is back with a vengeance.