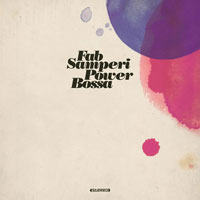 Fab Samperi a.k.a. The Captain (or ‘Commander Of The Beat’ as he’s known around these parts) follows up flagship single Listen Up with the rest of his fleet of new tunes in the shape of album Power Bossa. As the ‘bossa’ bit of the title implies, continuity throughout this LP comes from being rooted in the rhythms of Brazil but as the ‘power’ bit would suggest – percussion is generally rather more substantial than a little latin-jazzy cocktail shimmy and draws on both hip-hop and drum n bass for that extra kick. Talking of hip-hop, the party-starting Brand New Day featuring MC Joelistics of Oz crew TZU (released a while back on limited 7 inch) appears here in what is described as the ‘Psychedelic Bossa’ mix – completely different in feel to the other version and still the bomb. Indeed, props have to go to Samperi for his assemblage of talent. Northern soul boy John Turrell (of Smooove & Turrell fame) appears on both Everyman and Heaven Sent, Bella Wagner does a sexy vocal turn on soul bossa groove Stand Back while new kid Jonnathan Molina delivers big time on soul n bass classic Listen Up – yep that one is still the Don – see HERE for previous positive ravings about that track. All in all Power Bossa is the summer you hope you’re going to have this year, albeit in musical form. Unless of course, like Fab Samperi (he’s Sicilian you know) you actually live somewhere that gets a decent summer in which case it’s the soundtrack to that, when it arrives.
(Out now on Agogo Records)