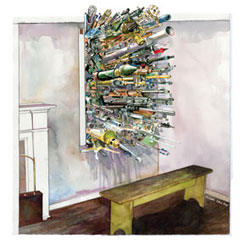 It says here that these two are, ‘a duo thoroughly steeped in hip-hop accolades’ – which is ironic really because they sound like a duo thoroughly steeped in shit American rock. It turns out it’s been five years since Eyedea & Abilities last troubled people’s ears – personally, I could have handled a full decade. Ironically (again) a full ten years would almost bring us to the inevitable nu-metal revival which should be due somewhere around 2017. Not that that would have made any difference. I’d still have given this both barrels. Don’t get me wrong – I don’t have anything against rock, American or otherwise. If it’s good. But when is ‘Nu’-metal good? And this owes nothing if not a massive debt to nu-metal. Honestly – of all the conceptual creditors you could have. And let’s face it – the place where rock-rap crosses over is full of ugly train-wrecks – Fred Durst trying to rap, Korn (in general) and Linkin Park. Then, if you’re travelling from the other direction there’s Mos Def’s Black Jack Johnson project and now By The Throat. Ok, this might not be quite as heavy as your average nu-metal LP but the guitars on Junk or Factory would certainly give lightweights like Incubus a run for their money. Then again, place this next to your average hip-hop LP and you’ll have trouble finding any common ground. Time Flies When You Have A Gun is the closest thing to hip-hop on here and it’s kind of like Aesop Rock after a pint of Red Bull – heavy, fuzzy, staccato beats and one eye on the rock audience. Alright, Abilities has been more inventive with the beats – and it’s true that the aforementioned Junk employs a drum n bass rhythm – but then I seem to remember Slipknot doing that some time ago.

If you’ve heard previous LPs you’ll know that Eyedea’s rapping is both unusual and that he has a phenomenal turn of speed when he wants. But why bother with what you’re good at when you can deliver the whiny vocals of some third rate copy of a Linkin Park covers band? And did I mention the lyrics. Almost as if trying to pre-empt critical response to By The Throat Eyedea presciently opens Hayfever with the words “I’m not shit,” a statement which, as a defence, has all the effectiveness of wiping your arse with a rizla. And (much as you wish he wouldn’t) he continues, “ I’m champagne, let’s all go home kill ourselves and our radios.” I’ve got an issue with the first part of that. Upon hearing it on this first track I felt sure this was some kind of post-modern ironic joke and we’d be back to hip-hop directly – albeit quirky Eyedea & Abilities style hip-hop. How wrong I was. They were still banging on in this vein some thirty minutes later in the final title track – fuzzy beats, fuzzy-feedback-fuelled guitars and dogged belief that sixth-form lyrics are the best way forward, “No anchor to the past. Cut the blood supply and hope the heart beats itself to death.” Indeed. On the plus side, the album is only half an hour long, though be prepared for it to seem much, much longer.
I will put in a good word for Spin Cycle because it’s the LP’s one saving grace with a strong melody and I would have liked it when I was fifteen. Coincidentally it is to fifteen year olds that I suspect this will largely appeal.
Five years is a long fucking time. On the evidence of this Eyedea and Abilities spent the time listening trying to make themselves sound like a cross between Incubus and Limp Bizkit with a dash of early Def Jux. Some might argue they could have occupied their time more wisely.
(Out on Rhymesayers, 12 October)

Posted on 20th September 2009 no comments