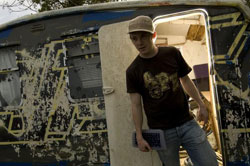 In this instance Falcon Punch is neither a fruity alcoholic drink with a dead bird of prey in it, nor a brutal pugilistic technique. Instead it is a darkly fruity slice of funky breaks from rising Bristol producer Ewan Hoozami with an Alice Russell/ Bamboos sample in it, featuring a fairly brutal beat not unlike something the Prodigy might have done around 1997 . Now in full audio-visual effect (courtesy of Lumen), you can cop the vid below and will shortly be able to pick up the digital sound file off the soon-to-be-released Booty Pirates: Volume 3. Press guff below vid and links.
Ewan Hoozami – Myspace
ewanhoozami.com

Falcon Punch by Ewan Hoozami from Lumen on Vimeo.

(PRESS RELEASE) UP AND COMING PRODUCER ‘EWAN HOOZAMI’ HAS TEAMED UP WITH A/V WHIZZ-KID ‘LUMEN’ TO CREATE AN INCREDIBLE MUSIC VIDEO!
One of the hardest-working musicians in Bristol, Ewan has teamed up with
Audio-Visual whizzkid Lumen (of Drawn Recordings) to create an incredible
music video! Lumen has inflected Ewan Hoozami’s heavy, aggressive funk
track ‘Falcon Punch’ (already receiving rave reviews in Bristol’s music scene) with style, humour and power.

DJ/Producer extraordinaire Ewan Hoozami (pronounced “you ‘n’ whose army”) of the South-West of England’s premier funk DJ crew – Funk From The Trunk – is fast gaining an international following since releasing some acclaimed mixtapes, several bootlegs and remixes and a sumptuous trip-hop EP on Dusted Wax.