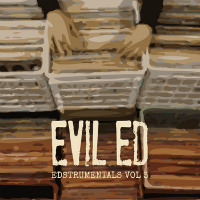 Since Swedish splatter-core flick Evil Ed came out in 1997 and this man had already been producing for some years by then, one might deduce quite reasonably that he didn’t name himself after that film’s protagonist. If the truth be known though, the hip-hop entity known as Evil Ed has been around almost as long as Mr Ed. Well not quite – but as a man who began djing in 1985, he certainly qualifies as old school. Moreover, during a production career that kicked off in ’94 or thereabouts he has worked with and/ or remixed many of the great and good of the underground UK hip-hop scene including Task Force, Jehst, Aspects and Mr Thing.

Edstrumentals Vol.3 comprises twenty tracks – mainly of Ed’s instros from the last thirteen years but also a couple of unreleased numbers and some bonus beats – all produced on his Akai S950. Plenty of boom and quite a bit of bap then.
(Out now on Dusty Platter)

Posted on 18th February 2014 no comments