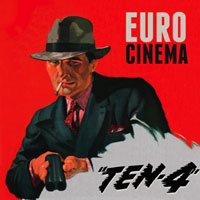 Euro Cinema? From Holland? Yeah, it’s ok – I’m referring to Euro Cinema the hammond beat band, from Holland, not the ‘Euro cinema’ ‘from Holland’ that my mate’s dad used to keep in a shoebox at the bottom of his wardrobe…if you know what I mean. What’s Hammond-y jazz funk got to do with cinema? It’s a ‘library music’ reference isn’t it? You know – all that ‘groovy’ sixties stuff that sound-tracked spy flicks, caper flicks, crime flicks – and well, pretty much anything that went anywhere near cinefilm or a cathode ray tube in the sixties. Clearly these boys are big fans of such funky types as Lou Donaldson (Of Blue Note Records fame), Dr Lonnie Smith and even Lalo Schifrin to a degree, though you’d have grasped that from track titles like Brother Lou and San Diego Humps anyway.

Ten-4’s first track Mulligan opens with some airy Hammond swells before the squelchy wah kicks in and then you know exactly where you are – the Blue Note vaults. Except you’re not. There are no covers on here whatsoever but there’s no need since Euro 4 have pretty much nailed the authentic sixties jazz-funk groove sound to the wall. Brother Lou itself is a dead ringer for Donaldson’s style and groove, Green Scene leads with the guitar and is, I imagine, a nod to legend Blue Note bandleader legend Grant Green, while funky tracks like Scool and San Diego Humps provide brand new stone-classic breaks for any true school hip-hop producers wily enough and awake enough to make use of them. Put another way, if you liked all those Blue Note compilations that got released in the 90s or the library music compilations that the Blow Up label put out a few years ago, you’ll be all over this lot like a male teenager after his dad’s smut stash. Chek!

Euro Cinema began recording tracks with producer Phil Martin (Soul Snatchers, Jazzinvaders, Laura Vane and the Vipertones). Shortly after, the band signed with the renowned American label Hammondbeat Records. The single Brooklyn Groove/Brother Lou was released on limited edition vinyl. The single got airplay on Radio6 (Netherlands) and BBC6, but also in the U.S. and Canada. In march 2011, the full length album “Ten-4!” is released. The title is 70’s B-movie slang, but also stands for the philosophy behind the album: ten original tracks by the four band members, without guests, remixes or cover versions.