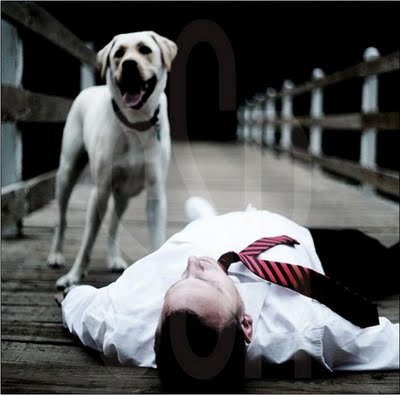 Esoteric interrupted the progressively dull first part of his career with partner 7L (which even they were getting bored of) to drop A New Dope in 2006 upon which he promised, “Saving Seamus Ryan coming soon.” That LP really was a breath of fresh air and (even if you don’t like Esotoeric’s nasal rapping style) you had to admit that its concoction of fresh beats and samples influenced by everything from new wave to drum n bass offered a fresh ladder out of the late-nineties rut into which they had fallen and which only the most hardcore Eastpak-wearing nerd could love. It was a triumph that Eso followed up by virtually diving into an early 2000s backpacker rut, throwing out dull solo LPs like luggage from a sinking ship with nary a sign of the long-awaited …Seamus Ryan and all the while failing to cash-in on the success of A New Dope by dint of not actually doing anything as good.
Anyway, Saving Seamus Ryan is finally here and – er – it’s a concept album which kind of made me think that I was more likely to need saving than Ryan. The central conceit is the story being told which, as far as I can make out, is partly relayed through the medium of the album itself and in full in the 52-page book that accompanies the official release. Um – yeah – whatever – but is it dope?
The answer both lyrically and beatswise is, ‘Quite often – yes.” On this the Boston MC/ Producer often uses beats that are both good, and which take a lead from A New Dope although he still also makes occasional use of some plodding boom-bap – it’s the ‘plod’ that’s the issue not the boom-bap. The (ironically) dope-beatless I Need A Dope Beat exemplifies this plod though perversely it has the LP’s best lyrics, among them, “But how ironic is my empty wallet?…To get it back I’d earn a police record so convincing you’d think Sting’s on it,” and later, “I was so weak/ Thinking all…[you]…need in this game are some dope beats.” I beg to differ. I reckon it gets you quite a long way and it’s something he ought to remember as it meant I overlooked the fact that he made me listen to sickly rhymes about a dog on The King Is Dog precisely because it has one of the dopest beats on the LP, not to mention one of the best musical hooks. The K-Flay-featuring Modern Love In Boston and My Audition genuinely have real bounce and snares so crisp they’d make fresh prawn crackers look doughy. It’s a shame there are moments like Studio Time/ Goodbye which sounds so 1999 and actually kicks off the LP.

I guess I should mention the skits which help carry the narrative along and redeploy snatches of film dialogue (mostly plundered from Harrison Ford vehicles) and rap-acapellas (mostly plundered from Gang Starr’s Guru) in, I think it’s fair to term, an amusing manner – even if Esoteric starts to sound alarmingly like Ray Romano by the end.
In short, some tight rhymes and some dope beats – though not always at the same time and, although it kind of makes me shiver, a ‘concept’ that kind of works. Not quite a new New Dope Pt II but the closest you’re going to get anytime soon. One last thought though – what is up with that title? Why would you want to call your LP something that either makes people think of Steven Spielberg and the beaches of Normandy or a porn film where someone called Ryan finds his ‘privates’ getting a shaving? Or what is worse (since both ideas occur simultaneously) Steven Spielberg getting his ‘privates’ shaved on the beaches of Normandy…