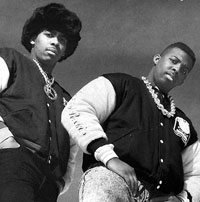 Is it possible to pack in some feeble EPMD-referencing wordplay whilst commenting on this rare rampage in the big smoke at London’s HMV Forum on 19 February next year? Actually, I might already have started. One suspects Errick and Parrish may not be making as many dollars as they’d currently like given that the last time they gigged in London was ten years ago. Not that I’m suggesting they’re gold diggers or anything – I would imagine things’ll be business as usual for the boys and that they’ll let the funk flow. Man – it’s like shooting fish in a barrel – which – coincidentally, is my thing…er – right that’s enough. Keep checking back – there’ll be a comp. for free tickets in the New Year innit…full press guff including full-lineup, times and prices below…
EPMD – Myspace

EPMD with their sample-reliant productions and monotone rapping styles were among the best in hip-hop’s underground during the late ’80s and early ’90s. Never short of a funky groove and a sharp lyric EPMD created many classics over the course of their four albums (from the 1988 classic Strictly Business to 1992’s Business Never Personal). Coming together in 1987 – naming themselves EPMD, short for “Erick and Parrish Making Dollars” – the duo recorded their debut single “It’s My Thing”. That single was later licensed to Chrysalis, and EPMD was eventually signed to Sleeping Bag/Fresh Records for their first full length album “Strictly Business”. Ultimately they found themselves on Def Jam by the beginning of the ’90s. Presideding over an extended family dubbed the Hit Squad, including Redman, K-Solo, and Das EFX.

Posted on 14th December 2010 no comments