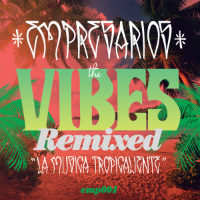 Washington DC dj/ production collective Empresarios round off their The Vibes LP-related release schedule with The Vibes Remixed LP (taking in )- not to be confused with The Vibes Remixed EP which came out in the summer though it does contain the four remixes of track The Vibes which that featured. Also included are two remixes of Morena, two of Salsoul, three of No Vamos A Parar and Farid’s Main Pass remix of Encanto – all previously released. It would be unsporting not to include some new treats however and so those of you who like to house will be especially pleased to hear that Stereo ’77 and Funkin Bastards have delivered a house mix apiece of Pa La Calle while Bedside has turned in a remix of Alegria. King of them all though is still Bobby C Sound TV’s latin ghetto funk take on No Vamos A Parar.
(Out now on Empresarios Musica)