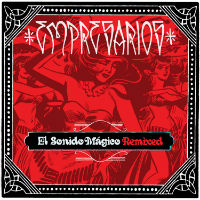 What with it being half a year down the line from the release of Empresarios‘ El Sonido Magico, it’s remix o’clock and a dirty baker’s dozen of producers have been assembled to show entrepreneurial innovation with the stems of the magic sound of Fort Knox Recordings‘ purveyors of tropicaliente. Which means that G Flux, Fort Knox Five, Omegaman, Bobby C Sound TV, All Good Funk Alliance, Basement Freaks, Solo Moderna, Stereo 77, Lee Mayjahs, Rob Paine, Auditors Domination, Cilantro Boombox and AfroQBen all saddle up for action in a musical big screen adventure which moves from digi-dub, through future funk and ghetto funk to downtempo. And house – but we don’t have to talk about that.

Special mentions in dispatches have to go to that king of the beats Basement Freaks for his dubbed-out western/ big band swing set version of Rey De Reyes and the twitchy synth-skank of Solo Moderna’s Sentamiento – though that doesn’t quite match the latin energy of the original. Clear winners however, are G Flux whose subtle digi-dub version of the more traditonal dub of Rompan Fila provides a bit more oomph along with Fort Knox Five themselves who energize the spaced-out Latin-isms of Maria Juana into some bumping barrio funk. Feel the tropical heat ese!
(Out now on iTunes and Beatport on Fort Knox Recordings)